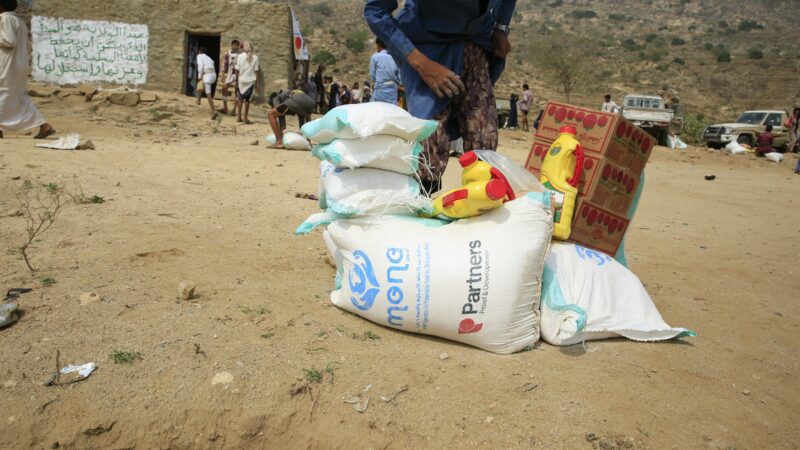 During a 6-day trip to al-Dhaher district of Sa’adah governorate near Saudi border Mona Relief’s team was able to reach out 700 HHs approximately 4900 individuals in Al Khalufa, Shamiah, and al-Quhrah areas.

Our food aid baskets distribution was carried out during four days in targeted areas. In Al Khalufa area Mona Relief’s team delivered 200 food baskets based on a fund by our partners in Poland Schools for Peace for 50 parcels as Mona Relief’s campaign in Patreon funded 150 parcels others.

In Shamiah area of al-Dhaher district of Sa’ada governorate near Saudi border, Mona Relief’s team was able to distribute 100 food baskets to approximately 700 individuals. Our food distribution was funded by our fundraising campaign in Patreon.

Our food aid distribution was funded by our partners (Partners Relief and Development) for 300 parcels while 100 parcels others was funded by Mona Relief’s fundraising campaign in Patreon.

The distance from Sana’a city to Sa’adah governorate is 242 km far and from Sa’adah city to al-Dhaher district near Saudi border is 150 km far. As the road to the targeted area was very long and dangerous. And for that reason the cost of transferring to that area is very high and the price of food items is high as well.

Due the ongoing conflict in Yemen and after eight years of conflict which have left 22.2 million people in need of humanitarian assistance, 11.3 of which are in acute need. And 17.8 million people in Yemen are food insecure. Out of this, approximately 8.4 million people are severely food insecure and at risk of starvation. As a matter of fact the conflict has destroyed people’s livelihoods and reduced their purchasing power, making it difficult for many Yemenis to meet minimal food needs.

Around 2.9 million women and children are acutely malnourished; another 400,000 children with severe malnourishment are fighting for their lives only a step away from starvation.